After the Repeal of “Net Neutrality” AT&T Can Destroy Netflix, But Will It? 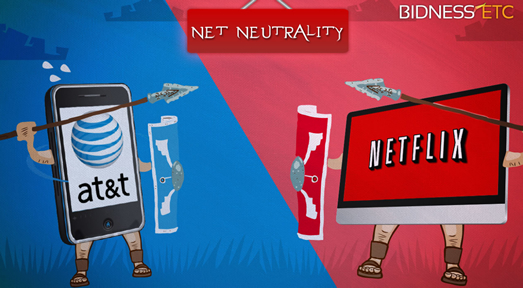 After the Repeal of “Net Neutrality” AT&T Can Destroy Netflix, But Will It?

(or any other streaming competitor for that matter)

Net Neutrality has again resurged as a hot topic in the news and on our social media feeds because of some major happenings.

First, the California legislature introduced a bill to defy the FCC and restore net neutrality principles by creating the strongest net neutrality law in the nation.  Twenty-nine states introduced bills aimed at restoring net neutrality, according to the National Conference of State Legislatures. Of those, Oregon, Vermont and Washington signed a bill into law.

Bloomberg Law interviewed Gigi Sohn and asked her about the AT&T-Time Warner merger and net neutrality’s relevance. Sohn told Bloomberg, “It’s not that AT&T-Time Warner would be competing with Netflix, it’s that they could destroy it. But to make that argument you have to talk about net neutrality.” Sohn shepherded the net neutrality rule under Obama and was a senior advisor to FCC Chairman Wheeler.

With net neutrality being repealed and market competition being a core value in America, how could this AT&T merger destroy Netflix or (any other streaming competitor)? Well let’s take a moment to further understand net neutrality.

“Net Neutrality” is a concept where any data you access on the internet through your Internet service providers (ISP), like Comcast, Cox, AT&T, Spectrum, Verizon Fios, etc., is treated the same way as all other data. Whether you’re watching a movie on Netflix, playing a video game, reading the news, or watching a Twitch stream, your data will flow at the same speed without preferential treatment to any given site or service. The data is “neutral” – not positively or negatively influenced based on what the consumer is watching or doing.

It is just like how our water utilities work – when you turn on the faucet, water comes out. The water company doesn’t charge you more or change the flow if you use that water for a shower, washing the dog, or letting it run aimlessly without using it. It’s just available, when you need it.

R.I.P. Net Neutrality and the Aftermath

On December 14, 2017, the Federal Communications Commission voted to repeal “net neutrality” rules.  With abolition of these rules, we are granting ISPs the power to potentially reshape Americans’ online experiences by selectively blocking or slowing down (or speeding up) websites. ISPs will target the streaming giants like Netflix and YouTube first because it means more dollar signs $$$. But it can easily expand to any widely used streaming service, impacting everything from online gaming to podcasts.

On the business side, ISPs could force media giants like Hulu (partly owned by Disney), Netflix, YouTube, Amazon, and other video services to pay fees in exchange for making their content available to subscribers, to access faster delivery speeds or completely destroy them. On the consumer side, ISPs could force consumers to pay higher rates in exchange for faster access to certain data-heavy activities, like video streaming.

Most experts expect that ISPs will begin packaging the Internet, just like they have packaged cable TV. They will begin to “bundle” similar content together and charge more for high speed and access to those bundles. Imagine a series of $5 add-ons for your current internet service: If you want to access or add faster speeds for Hulu, Netflix, YouTube, Amazon Video, and other video services, that’s $5. If you want to add faster speeds for your video gaming sites through services like Steam and EA Origin, that’s another $5. If you want to high speed access your social media, that’s…another $5.

However, ISPs will be under no obligation to neatly package all of the things consumers want. They could easily divide the most popular services into unrelated bundles, forcing consumers to buy services they don’t want in order to get what they do want.  Imagine if you could pick cable channels one by one, instead of having to opt-in to 200 channels to get that one show you wanted.  It’s a ploy to charge more by forcing people to order what they don’t actually want, instead of presenting a single, more desirable bundle. The worst-case scenario is that ISP’s can make access to streaming so expensive and unattractive that it destroys the market for Netflix, Hulu and other streaming giants.

But this bleak future is not the only way that Internet without net neutrality can be leveraged.

Instead of trying to take advantage of consumers, ISPs can use the market landscape to better serve customers. Streaming giants like YouTube, Amazon, Facebook and Hulu have enormous amounts of data on their customer base: age, social circle, content preferences, friends, buying habits, and more.  With net neutrality repealed, IPS’s have a great opportunity to partner with these giants and provide precise and customized services to their audience.  This way, bundling Internet services is no longer a ploy to take advantage of consumers, but an enjoyable tool to reinvent how we can customize the flow of Internet with more efficient models.

Currently, if consumers want super-fast speeds for streaming, they have to purchase the highest-speed package and have it available ALL the time, even if they go on vacation or are not streaming that week. Imagine if your Internet speeds could automatically provide you with the highest speeds available for data-heavy content when in use and gives you a credit when they can divert that bandwidth to other consumers when you are in a lull – thereby making it more efficient, affordable, and relevant for consumers.

What Media Companies Should Be Doing

Clever media companies should begin to partner with ISPs to start customizing ways to service their consumers. A great example here is online gaming – with the increasing popularity of live streaming services like Twitch.tv, and the rise of eSports, there is now a large subset of consumers that both play and watch the video games they enjoy. The next step is working to divide streaming services like Twitch from the video games themselves in different bundles and speeds, allowing consumers to select based on precise preference and data needs. It’s feasible that video game developers will even start partnering with ISPs and streaming services to give their consumers a better, free experience on one platform, thereby forcing consumers away from other “pay to play” rivals.

Is Netflix Doing It Already?

Some may think that, at best, this is optimistic view of the future after the net neutrality repeal.  But it’s worth pointing out that recently Netflix has cut direct deals with ISPs including Comcast to guarantee dedicated bandwidth for its video traffic and has grown its subscriber base dramatically. Netflix ended the quarter with 130.1 million global streaming customers, up 25% year over year, and for the first time ever generated more revenue abroad than in the U.S.

Netflix CEO, Reed Hastings believes that the rollback of net neutrality is no big deal. He said that regardless of whether any given country has net-neutrality laws, “broadly, around the world, consumers have the expectation [of net neutrality] and ISPs are delivering it.”

Now, Netflix may not be leveraging the new landscape as much as it could, still they do not seem opposed to partnering with ISPs to create better customer experiences. But are ISPs delivering expectations because media giants like Netflix are forcing them to do it or because they don’t want to dupe customers into another slew of unwanted bundling. I proffer the former and we better keep it up.